As one of many hockey players from his hometown in New Jersey, Rich Brande set himself apart from the rest at an early age. From player to coach, and now advisor, Brande joins Elite Jr Profiles (EJP) with an abundance of knowledge and experience that will help student-athletes take their careers to the next level.

Richard is a seasoned education professional having spent over 20 years in the school and education industries.  As a long-time Director of Admissions and international consultant, Richard has deep knowledge of the US education system and vast experience with families from all over the world.  He has overseen several schools’ enrollment and revenue growth strategies and is a proven leader in developing student markets for independent schools.  Richard has also worked in the education business, leading the US-based operations group for a large multi-national student placement and consulting organizations. As a former prep school, college, and pro hockey player, Rich Brande knows precisely what is needed to take a student athlete’s career and education a step further. As a player at the University of Connecticut (UCONN), Rich was known for his smooth skating, hockey sense, and hard-hitting style. Ultimately, he worked his way from youth hockey in New Jersey all the way to semi-professional hockey. After a short stint of professional games, Brande moved on to the coaching side of things. Coach Brande was blessed to have coached both men’s and women’s hockey during his tenure as a hockey coach including coaching roles in New England Prep South Kent Selects Academy, NCAA Division 1 and Division 3 women’s hockey.

Along his journey, Coach Brande has coached some of the highest levels of the game of hockey. Not only did he start a women’s hockey program at the National Sports Academy in Lake Placid, New York, but he was also the assistant coach of the Women’s ice hockey team at the University of New Hampshire (UNH).

After coaching at UNH, coach Brande went back to South Kent Preparatory School where he served as the Director of Admissions and was the first General Manager and assistant head coach of the South Kent Selects Hockey Academy. During his tenure at South Kent, Coach Brande also served as the International Athletic Advisor helping foreign student-athletes and parents navigate their way through the prep school system admissions process and help to advise those student-athletes through the college recruiting process. 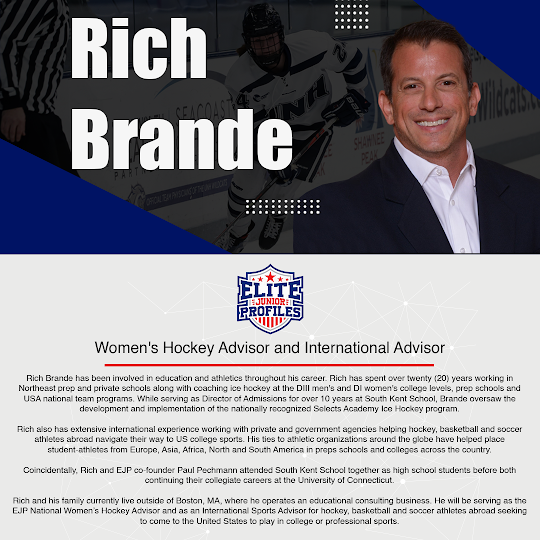 Huge Opportunities Ahead For Women’s Sports

Joining Elite Jr Profiles as the National Women’s Hockey & International Advisor, he advocates for women’s ice hockey and a former coach. Recalling his days coaching UNH women’s hockey, Brande had this to say, “I’ve got to tell you, the athletes I worked with while coaching at UNH were some of the most competitive, committed, driven, and hardworking athletes I have ever seen.”

Regarding women’s sports and especially the prospects for younger generations, Brande had this to say, “While there is still plenty of room to grow, the heightened recognition over the years is monumental for women athletes of all ages. As women’s sports rapidly progresses, the opportunity for these young athletes is endless.”

During his time at South Kent, Rich was there to oversee the basketball, soccer, and hockey programs as Admissions Director. Through his networking skills, Brande was able to enter the international student market. Expanding his reach, Brande influenced more young adults to achieve their education goals while playing the sport they love. Joining EJP, he will continue to do just that. “I truly enjoy working with kids and helping them achieve their goals and move on to the next level.”

Learning the Ropes of International Recruiting and Admissions

Whether it is domestic or abroad, Rich Brande has an extensive network expanding across the globe. With that, not only is Rich joining the EJP team as their National Women’s Hockey Advisor, but he will also take on the role of International Sports Advisor for hockey, baseball, basketball, and soccer. With ties to athletic organizations worldwide, Rich Brande and EJP will be able to lend a helping hand to any student-athlete in these sports from Europe, Asia, Africa, and the Americas.

While coaching and working with international students, Rich’s foothold on the global market expanded significantly. “When I would travel the world, I would meet with these individuals, or folks sending us players. While helping build those networks with all these coaches along with working in both admissions and financial aid departments, Rich discovered the full spectrum of needs with recruiting internationally. “It is imperative to take time to get to know the student who is trying to become a part of your program. Getting to know them, letting them open up and talk about themselves while getting to know their families is a vitally important part of the process,” said Coach Brande.

In his new role with Elite Junior Profiles, Rich Brande understands the importance of placing the right student-athlete in the right program. With the competition getting more intense year after year, student-athletes are looking for a way to set themselves apart from others. “There is a real need for these young athletes to market and promote themselves to coaches. They need tools and insights on how to do that.

Add in the new dynamics of the COVID-19 pandemic on-top of that there and Coach Brande was insistent that there has to be methods and mechanisms for student-athletes and coaches to get to know them besides a little bio sheet and a highlight video.” This is precisely why Mr. Brande joined Elite Junior Profiles; with the EJP platform, they will be able to set themselves apart from all the rest in measurable ways.

Elite Junior Profiles is a platform designed to help student-athletes build a stellar online profile that they can leverage to distinguish themselves in the highly competitive space of junior and college athletics and the college recruitment process.

EJP was founded by Coach Paul Pechmann in partnership with Lane Houk. Lane is the marketing and software partner that powers the world-class technology, website, and marketing efforts for the platform as well as the student-athletes using the platform to build their online presence and advance their career.

Paul has been coaching hockey and developing young men for over 12 years in youth, junior and college hockey. He is the current coach for Elon University Men’s Hockey and is also a Tier 2/3 Junior Hockey Scout and Advisor.

What Does Elite Junior Profiles Do For Players and Their Parents?

In addition to helping high-achieving student-athletes and their parents to build, enhance and showcase the players’ online profile and resume to prospective scouts, colleges, coaches, committees and organizations, EJP also provides consulting and marketing services for families that need expert assistance navigating their children from high school to college.